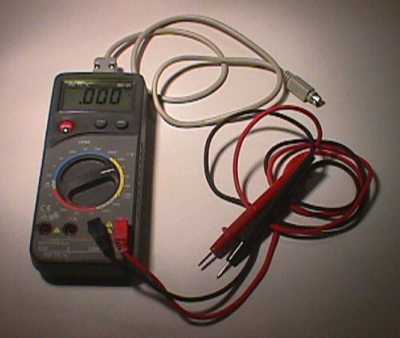 Our first Smart Digital Multimeter, CCDmm, developed at Concord Consortium is based on the Metex ME-21 multimeter. The Metex ME-21 comes with an optically isolated RS-232 serial interface. We developed a special cable and software to allow it to work with Macintosh computers.

The CCDmm was developed by Concord's NSF-funded Science Learning in Context Project (SLiC). The CCDmm is one of a class of small instuments combining sensors and interfaces we call SmartProbes. Checkout the SmartProbe home page for more information.

The Metex ME-21 3 1/2 Digit Multimeter with Computer Interface is available from Jameco for $60 when bought in single units. The price drops to $45 when purchased in quantities of 25 or more.

We developed software for the Macintosh that allows real-time graphing of the readings of the DMM over the following time periods:

After collecting data the data can be copied in to theclipboard for pasting in another program such as a spreadsheet for further analysis.

The scale and units on the screen update automatically as the switch on the DMM is moved from one position to another. The software will display the following ranges on the DMM:

The Macintosh software was written by Walter Lenk.

Version 30 of the CC Dmm Reader program is available for a Macintosh. This version is designed to only operate with the Metex ME-21 DMM. You can download a self-extracting-archive here:

If you have a newer Macintosh with USB please use the following version of the software. It was written by Steve Beardslee as part of the development of the Windows version below. He used RealBASIC for the cross platform Mac and Windows development. This version supports the Mac Communication Toolbox and as such better supports USB-to-serial adaptors like the Keyspan USB Twin Serial Adapter.

The Windows version of the software was written by Stephen Beardslee.

In the Windows version distributed via floppy to the Jason field testers there is a bug which occurs when measuring resistance. If the measurement goes off-scale, reported on the meter as 0.0L, the software records this as 0.

This bug has been fixed on the version available for download below. The zip versions of the files have been compressed, you will need an application to unzip them after downloading them.

Below is a copy of the Windows program built with the latest version of RealBasic. This is version 3 of RealBasic and is an alpha release of the development environment which normally means it is not as stable as the release we used for the program above (version 2.1.2). However at least one person is still having problems using the application on her Windows NT system. If you are in this category you may want to download and try the following versionof the software (while NT is used in the name it should be usable on most Windows systems).

An enhanced versionof the program is available which operates with both the ME-21 2 1/2 digit DMM and the Metex M-4650CR 4 1/2 digit DMM (this DMM is no longer available). This program has collection times that extend to 24 hours however the program starts up expecting to be connected to the M-4650CR. If you use this program with the ME-21 you must select the proper DMM from a menu before operation will proceed.

In order to operate with the Macintosh we designed a custom cable which created the power necessary to operate the optically-isolated serial interface built into the DMM. Here is a schematic of the cable:

Here is the actual layout of the circuit board:

Also available as a PDF file.

If you have technical questions about the CC Smart Digital Multimeter you can write to me, Stephen Bannasch at stephen@concord.org.